Generations of love and care

A huge thanks to fellow Woody Boater Billy Burns for sending in this heartfelt and wonderful story on his Great Grandfathers Lyman. I know many of us wonder if a younger generation cares. Well, this will end that discussion. Thanks again Billy, you made my week of Family Love affairs even better, which I didn’t think could. Take it away Billy. All Lyman’s have a story. Their varnished holes and missing parts hold memories long forgotten. But most Lyman owners don’t know the story behind these relics. Fortunately for us, our boat has been passed down through four generations. My great grandfather purchased this classic from a boat yard in Albany, NY in 1956. Now, 60 years later, it’s been passed down to me after a full restoration. This year, our Lyman Outboard runabout was reborn. 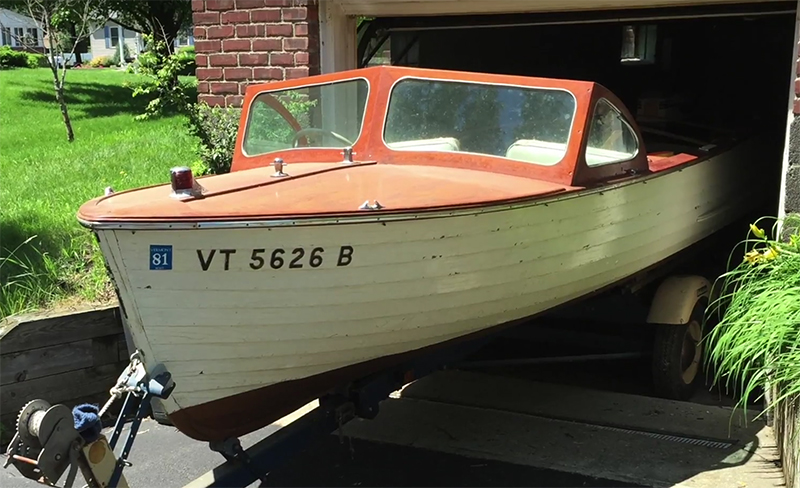 In 1956, my great grandfather, Harry T. Lieberman, purchased his first boat, a 1956 17’ Lyman Runabout. He purchased it from Whichone Inc. Boat Marine, which is still located on Broadway in Albany, New York (now Albany Marine Supply Company). My great grandfather kept the Lyman at the docks at the North Hero House Inn and at Tudhope’s Marina, which are both located in North Hero, Vermont. Tudhope’s would take care of maintenance and winterization of the boat from 1956 to 1982. Sometime between 1956 and 1958 a windshield was added to the boat when it was brought down to Albany, New York for the summer. 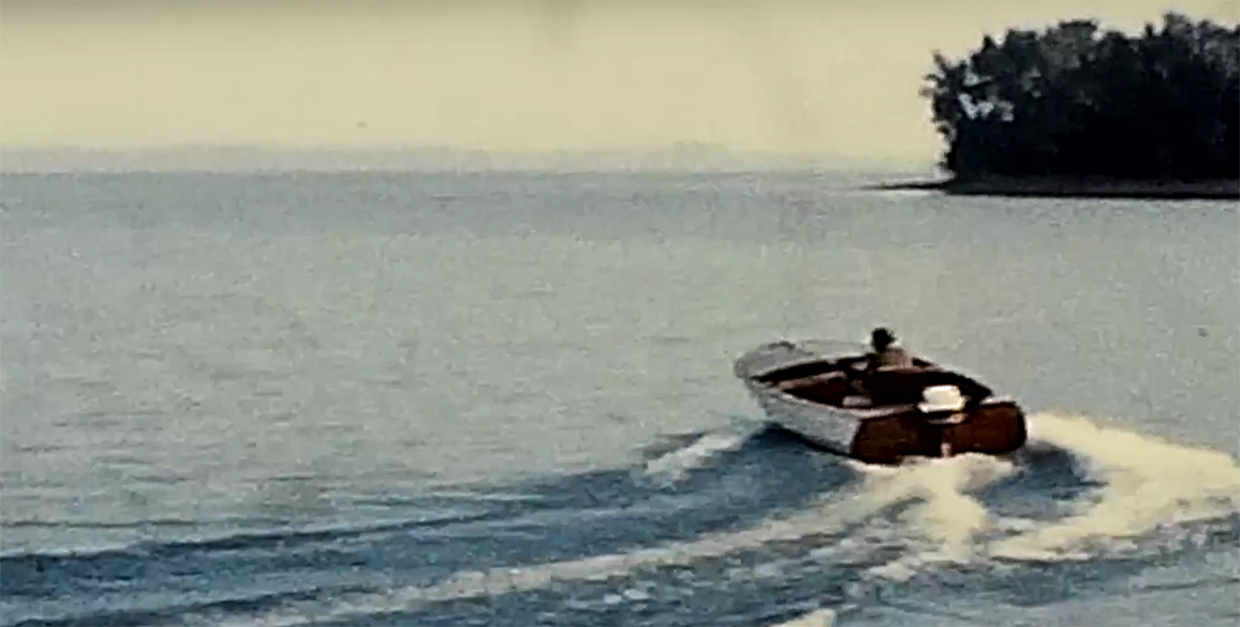 Headed out for some fish

My great grandfather was an avid fisherman, who spent his summers fishing on Lake Champlain and in the Adirondacks and spent his winters fishing in Florida. He taught his grandchildren, my father and his brother, the skills of boating and fishing on Lake Champlain when they were ages 7 and 5 respectively. In 1966, my great grandfather passed away suddenly leaving the boat to be used primarily by his wife and my grandparents. Now that is a classic wave!

During the 1970’s, the Lyman spent a couple of summers at Lake George. In 1976, my grandfather, Bill Burns, purchased a new Holsclaw trailer and replaced the original motor with a new 35hp Evinrude. 1981 marks the last time the boat was registered in Vermont. My father remembers taking the boat out up through the early 1980’s, but then the boat was put into storage where it stayed for 35 plus years. Finally, in 2016, I asked my father if we could restore the boat. My father had painted and varnished the boat a couple of times in his youth, but this time it needed more attention. So we contacted Howard Mittleman, a boat restorer and preservation carpenter by trade and the owner of North River Restorations located in Schenectady, New York. I had first met Howard a few years earlier when he was reconstructing a 17th century boat called the OnRust. I knew he would be a perfect fit for our restoration because of his work on that project. 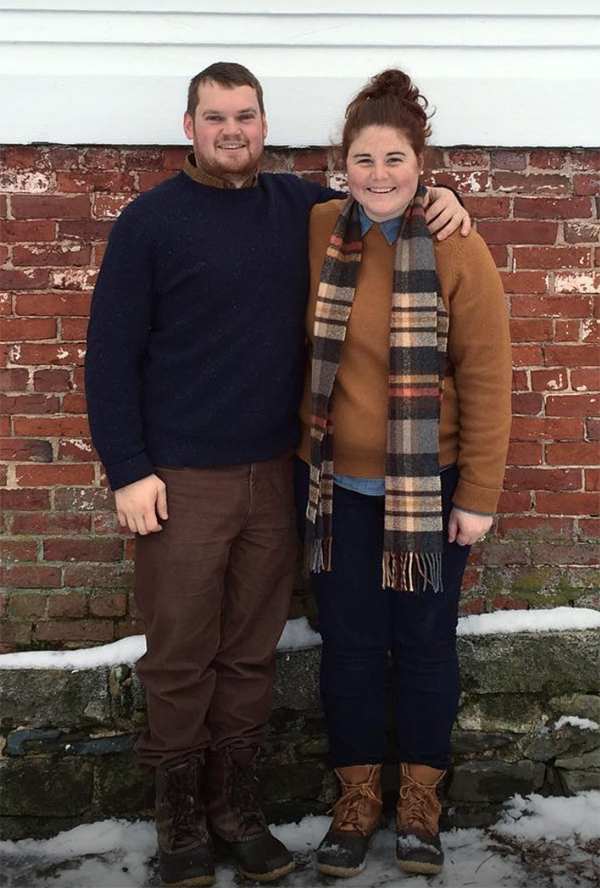 Billy and his beautiful bride Ali.. who by the way right now is yelling. Why did he use that photo? It’s Okay Ali, they are all here to see the boat.. Sorry. Just the way it is.

At first Howard was timid at the project and how he puts the condition of the boat as saying “it was pretty scruggy, a lot of peeling varnished, a lot of miscellaneous broken small parts, and particular the back end was the worst with the butter knife test”. After 35 years garaged and not in the water, the boat’s repairs were not major, the planking and ribs were still solid, only a lot of scraping and sanding for Howard and his crew. Minor repairs were made to the interior, the front seat had separated in two sections and was glued back together. At the stern, the bow eye, had shown some S scarf joints that separated and they were re glued together with added screws for strength. The only major repair was at the transom just at the water line where a section of about 16” by 24” was carved out and repaired with new mahogany. The hull number 44447 was found upside down on the transom just below the outboard. The body was painted and the hull painted with Petit Hard Racing Copper Bronze with staining using the Lyman Mahogany stain and varnishing the deck and interior. After the first water test, 12 spots of leakage were found and brought back to the shop to apply caulking and to reevaluate the areas. One more coat of Copper Bronze was reapplied with additional painting of the body. My father restored the 1976 35 horsepower Evinrude motor, that had rodent damage inside the wiring harness and other intricate parts of the engine. The engine was in storage for about 35 years. The main issue when we opened it up was a large mouse nest which caused a lot of corrosion and also damage to the wiring from the mice chewing through the insulation. One of the ignition coils was in really bad shape and there was also another nest inside the airbox. All of this was cleaned up, the carb was removed, and the corroded areas on the block and head were wire brushed and painted (Evinrude/Mercury light blue engine paint). The carb was in fairly good shape as there were no parts of the nest directly in contact with it and there was just a small amount of crud in the float bowl. Two wiring harnesses had to be replaced. There was also damage to another harness however this was just on one wire. It was too tight to get electrical tape on so we used “Liquid Tape” which worked great. The flywheel was removed and soda blasted which cleaned it up nicely. Two new coils, new plugs, and a lower unit oil change completed the repairs. The engine started right up and will get a final tuning once we get on the water. 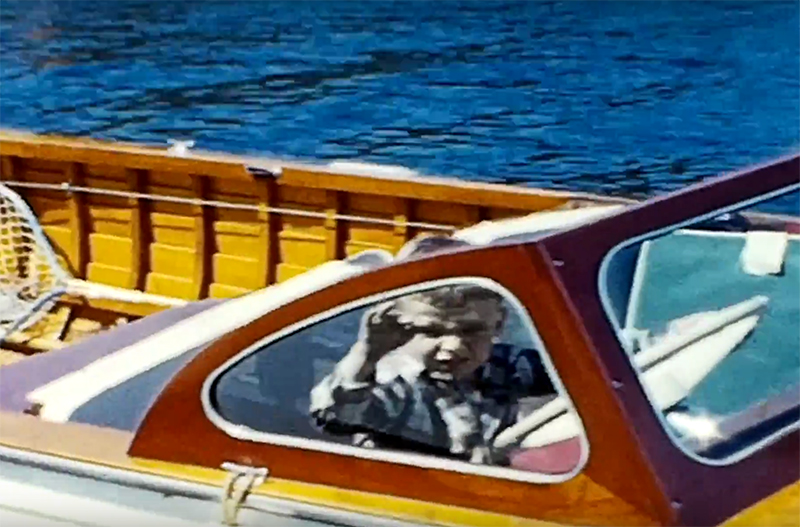 From the film. You can feel the love of family in this footage without one word spoken.

Just discovered by digitizing 8mm film, I have found out that my great grandfather purchase the Lyman originally with no windshield, and added it at the next season as shown in photographs from 1957. The films show the boat the first year purchased to about 1970. They show the fish my great grandfather caught using the Lyman and teaching my father and his brother about fishing and using the boat each summer at North Hero, Vermont You can see the film and video of its restoration here:

And of course, here it is, 6 ish minutes of pure goodness. Have a great rest of your day now. Stay tuned tomorrow we have more Family love Rocketing your way!

15 Responses to “All Lyman’s Have Stories, This Lucky One Has A Family!”