It’s a Pre War During a war? Post war?

We refer to our boats as Pre War and Post War. But there are really more undefined ways to think of our boats. Pre Mass Production, and Mass Produced, Transition Boats, those boats made when fiberglass was starting to come into the world.
Color boats, when designers were bored with boats all being the same varnish color. Phil Andrews with Jara from Katzs Marina and his Blue Arabian.

The car years.. different lessons learned with safety and boats being used a lot. Also sales, what sold. no point in making a fantastic boat if it doesn’t sell. We see this in new car lots today. Silver and black, grey boring box cars sell. oh sure the lime green Camaro will be worth more in later years but right now its concreted to the showroom floor. Stinky, back when she ran, with her sharp bow and round stern Then there is bow design, it seems like we went from a dead drop cut in the 20’s and 30’s with a softening in the fourties to a just round soft bow in the late 40’s and into the 50’s and then back to a sharp bow with a slight flair as the decade of Woodys Came to a sad end. Sylvia 1940 Just one year later with a rounded bow No granted, this is a different style boat. But the wood tone is different and still somewhat timeless to today. There are Grand banks Yachts running around that share the same Feeling. And then there is the Timeless fun design of Aristo Craft boats. They are unique thus timeless, and they have kept the design details consistent for decades. This is a brand new design, and you know its an AristoCraft from a mile away. Amazing and not easy to do. I will wonder off topic now. BMW, Porsche and Mecedes all do this. Its VERY sophisticated design standards and tell a story of control, and quality. It also helps resale since age is kind to timeless design. 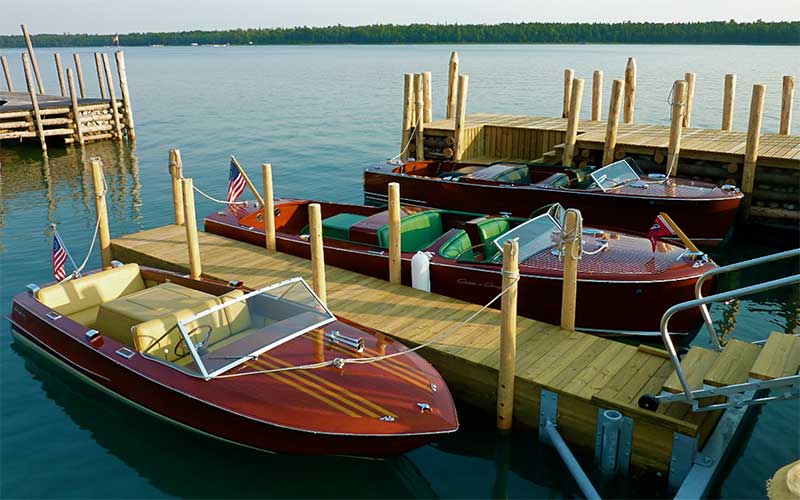 Alex Watsons Grand Prix is one of the last Wood Boats Chris Craft ever made, with a 427 next to two 25 Sportsman. The Apple green interior is a give away to an earlier model. Also not the rear seat set up vs the other one. Thats a Scripps engine set up. LOVE that boat Even in Plastic you know its a Chris Craft, but stuff started to all look the same around this time. Alex Watsons XK 19

18 Responses to “Observations On Four Decades Of Boats”