What? Does Woody Boater not know it’s 2018 and we don’t talk that way anymore? I suppose this sort of sexist marketing is a thing of the past. Like 1914. Never mind that the Boatress would agree 100%. This quote is from a 1915 Brochure for the John L. Hacker – Albany Boat Company. Below is some history on the subject from our pals at Hacker Boat Co. And an amazing restoration of one of the Albany boats! Early in his career, during less prosperous times, Hacker would seek work where he could find it. In 1914, Hacker teamed up with L.L. Tripp, who was Van Blerck’s eastern sales agent, in Tripp’s Albany Boat Company located at 9th street in Watervliet, New York, a few miles north of the city of Albany. While Hacker was the chief designer there, the company’s boats transformed from traditional round
bottomed launches to hard-chime V-bottom boats.

These were state of the art pleasure boats at the time. So confident was the company in the appeal of their boats that they boasted in their 1914 sales brochure that “…if your lady or ladies are along you may as well commence to figure your bank roll. Ladies are delighted with these boats. Women never did get much pleasure out of boats that were all greasy, dirty and spray wet after a short trip.”

The John L. Hacker-Albany Boat Company relationship was short lived. It lasted little more than a year. Below is a wonderful restoration done this summer and is now featured for sale on the Hacker Craft Website. HERE. 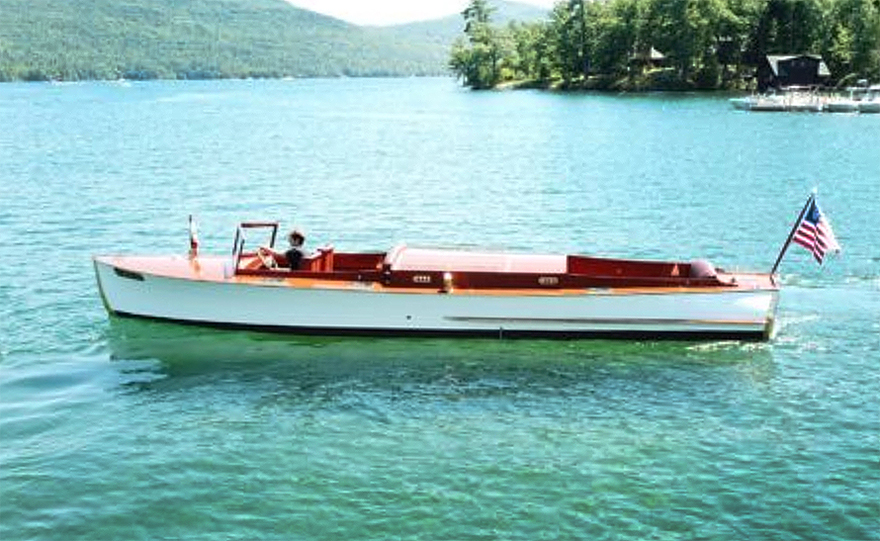 The craft is a 32’ Albany brand model, a hard-chine split-cockpit runabout, built by The Albany Boat Company, a precursor to The Hacker Boat Company. It was designed by John L. Hacker and Elliott Gardener. It is one of two remaining such models. Thats one heck of an engine

LOA: 32′ Beam: 7′ 6″ Built: 1923-6 Original Power: 6-cylinder Sterling Dolphin Current Power: Scripps 208 Abstract:
It has had at least one previous major restoration, including substantial material replacement, and some details appear to have been altered. The engine is not original to the model but is period correct and is itself a very rare item. 7 Responses to ““Women Never Did Get Much Pleasure Out Of Boats That Were All Greasy, Dirty And Spray Wet After A Short Trip””