A huge thanks to pal and longtime WoodyBoater Rabbit for sending in this wonderful report from Fitzke Paddleboards. Take it away Mr WoodyRabbitBoater!

The Kids Are Alright Kevin Fitzki right and a model of his racer

The Bob Speltz Land-O-Lakes chapter help its last spring clinic last Saturday, on a beautiful spring day. And guess what? It featured a real, live YOUNG person. Kevin Fitzke is a 36-year-old embodiment of the next generation of Woody Boater. By day he creates stunningly-beautiful wood paddleboards inspired, in design and craftsmanship, by the boats we love. By night he’s building the first -his own- of a series of gentleman racers based on Ventnor plans published in Motor Boating magazine in the 1930’s. (More about that later.) The workshop was held in Kevin’s tidy shop in Minneapolis. Packed to the gills, and filled with sunshine, we celebrated that it was also the official day of ice-out on Lake Minnetonka, the official start of boating season in the Land-O-Lakes. (And, yes, yes, I know that it’s a brand of butter, but it’s also what we proudly call our region and our club.) The chirping birds and the whiff of fresh varnish told us our big shows on Gull Lake and Lake Minnetonka were right around the corner. Fitzke began with a bit of background about himself. He caught the bug from his father and grandfather, working in his dad’s woodshop and sharing his passion for vintage boats, motorcycles and airplanes. Kevin then went into a short history on the Golden Age of gentleman racing in the 1930’s. He explained that only rich gentleman could afford gentleman racers, limiting the fields. 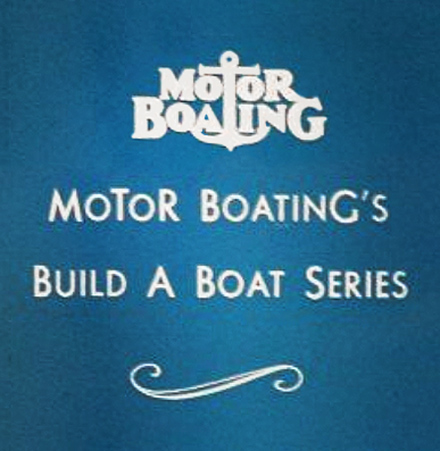 To expand the class Motor Boating Magazine began publishing free plans, from makers like Ventnor, that allowed the average man to build his own and compete with the rich boys. Kevin’s Ventnor began as a set of those plans. Those plans allowed for personal interpretation, and when it came to performance and aesthetics, it appears that Kevin is making all the right decisions. Eschewing a much heavier Lycoming straight six that Ventnor put in their own racers, Kevin opted to rebuild a simple, reliable and lighter 283 salvaged from a Matthews cruiser. From the aircraft-inspired instrument panel and aluminum cowling surrounding the cockpit, “Bug Bite” will be a stunner when launched later this Summer at the Cross Lake Show in Minnesota. And Fitzke isn’t stopping there. He already has plans to build another. And another. In the afternoon, Kevin talked about his amazing paddleboards and how he builds them, sweating every detail and once again making all the right aesthetic decisions. When he couldn’t find a wooden paddleboard made to his standards, he designed and built his own. The first was the “Bootlegger”, with lines inspired by the speedy Hackers and Gar Woods that kept our whistles whetted during Prohibition. With a profile more akin to a runabout than a surfboard, it features a novel cubby forward. Fitzke had only built a few when Vanity Fair Magazine named it to its prestigious Holiday Gift List, next to brands like Chanel. Kevin followed the Bootlegger with the more affordable, conventional yet still finely-crafted Speakeasy. What a fun event

It was a great Spring day in the Land-o-Lakes. There’s a number “36” on the hull of Fitzke’s gentleman racer, “Bug Bite.” That’s Kevin’s age. If he’s accomplished all of this by the middle of his third decade, the future looks very bright for our hobby. Where are all the young people? Well, you’ll find one on Snelling Avenue in South Minneapolis. The art of the future

(You can see Kevin’s paddleboards and learn more about them here: FitzkeBoards.com
I also highly recommend you follow him on Instagram at @fitzkeboards. He has a ton of great photos showing the construction.)