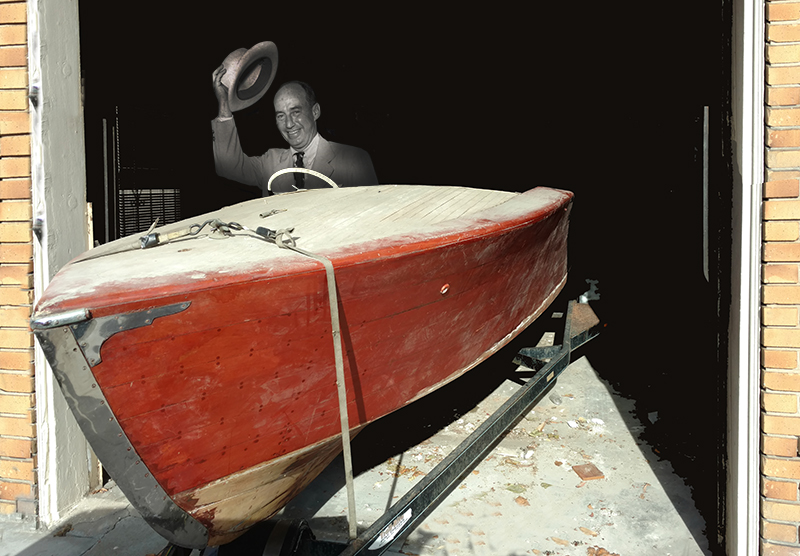 This is just the fun we all needed. Barn Find fun thanks to fellow Woody Boater Dave “Wicked Wahine” Anderson 1948 22ft Hacker that was in a garage in downtown San Francisco since 1984.  Take it away Dave!

It seems that January is a good time of the year to buy a boat!

Last January Brian Robinson called me and asked if I needed another boat, or did I know anyone who did.

“Well, that depends, Brian, what is it?”

“It’s another Hacker” he says.

Enough said. I’m in. Brian gave me the owner’s phone number and next thing I know, John Maddox and I pack up the Dodge with engine hoist, creeper, beer, tools, floor jack, more beer, cribbage, come along, etc. The reason for all the tooling is that the boat had been stored in a single garage since 1984 in Downtown San Francisco. This Hacker was once owned by Governor Adlai Stevenson and donated to a museum in San Francisco. Peace, Love, Dove, two blocks away from Haight Ashbury. John and I put new rubber on an old flat bottom trailer with no plates and headed for Baghdad By The Bay. We didn’t know what year or model it was, but how can you go wrong with a John L. design?

If you have never been to “The City”, then you don’t know what a treat you can be in for…narrow streets that only Steve McQueen could negotiate, not two So Cal boys during rush hour.

OKAY- WOODY HERE! You got 3 minutes? Crank it up, and just bask…

OKAY BACK TO THE BARN FIND!

I digress, we meet the owners and lo and behold, it’s a 1948 22 foot Hackercraft that is 98% complete with a Chrysler Crown motor sitting on blocks. Wow, what a rare boat! We lifted the bow with an engine hoist so that we could snake the trailer under it, use the come along to slide it onto the trailer and drag it down the 101 to So Cal. All we have is these 4 photos. Sorry, waiting on new ones

Fast forward twelve months and I have a new 5200 bottom, engine overhaul by John Allen, original instruments sent to Kocian, new fuel tank, rub rail by Thorpe, etc., etc., etc. Hope to have it in the water by mid summer, unless January happens in August.