Boat show host John Allen in “Belle Isle Baby” an early 1924 26′ Belle Isle BearCat as he arrives at the Bar Harbor Supper Club docks. Imagine this boat blasting down the St. Clair River with who knows what hidden in the aft cockpit.

THE ANNUAL GULL LAKE CLASSIC at BAR HARBOR SUPPER CLUB show in Minnesota, presented by the Land O’Lakes Classic Boat Club, never disappoints. A wonderful and diverse collection of antique & classic boats, some dating back to the 1920s, right up to the 1970s, from 33 footers to 15 footers (and everything in between) they’re all here. Offered by some of the kindest, most knowledgeable owners on the country.

Join us today (and tomorrow) for a visual tour of the event through the camera lens (and keen eye) of fellow Woody Boater Dane Anderson.

Most of these classic boats have some amazing history. If you have any questions please let us know in the comment section and we will do our best to help provide answers. – Texx Another shot of “Belle Isle Baby” this time with Matt Allen (John’s son) at the helm. The impressive Belle Isle is powered by a Kermath 6 – 150.

I was first introduced to this amazing 1924 Belle Isle BearCat during a tour of John Allen’s collection back in 2014, before Fort Mahogany was finished. It started my love affair with the Belle Isle marque, thus all the photos or her today. It’s also one of Matt Allen’s favorite wooden boats. “Belle Isle Baby” 1924 Belle Isle 26′ BearCat on display. This boat was strictly business back in the day, with a small front cockpit and no windshield required. As usual, the impressive docks at the Bar Harbor Supper Club were packed with classic boats again this year. “Godfather” has quite a history and now calls Minnesota home. It’s a very rare 1922 Chris-Smith & Sons (before Chris-Craft) dual-cockpit 26′ runabout. The sixth “standard runabout” built by Chris-Smith & Sons Boat Company of Algonac, Michigan. According to Wayne Mocksfield, this was the boat that was delivered to Gar Wood in October of 1922. A long shot of the 1935 Gar Wood triple. These boats take up a lot of dock space. The Gar Wood dashboard is simple, functional, but very elegant – just like the rest of the boat. The huge Curtiss D-12 power plant looks right at home in the 1935 Gar Wood. We should call these “Minnesota Jewelry Boxes”.

Of the seven or eight surviving 33′ Baby Gars that exist today, a total of four original 33′ Baby Gars reside in the Gull Lake area – three from the Lee & Penny Anderson Collection (“Sea Wolf”, “Johnny Johnson IV” & “Miss Jenny”) and one from the John Allen Collection named “Bolo Babe”. All four are powered by vintage Liberty V-12 engines that all run perfectly. This stunning 1926 Baby Gar “Johnny Johnson IV” is also from the Lee & Penny Anderson Collection, and is also powered by a Liberty V-12. Another shot of the Lee Anderson Best of Show Award winner “Untouchable” 1932 20′ Hackercraft at the dock. 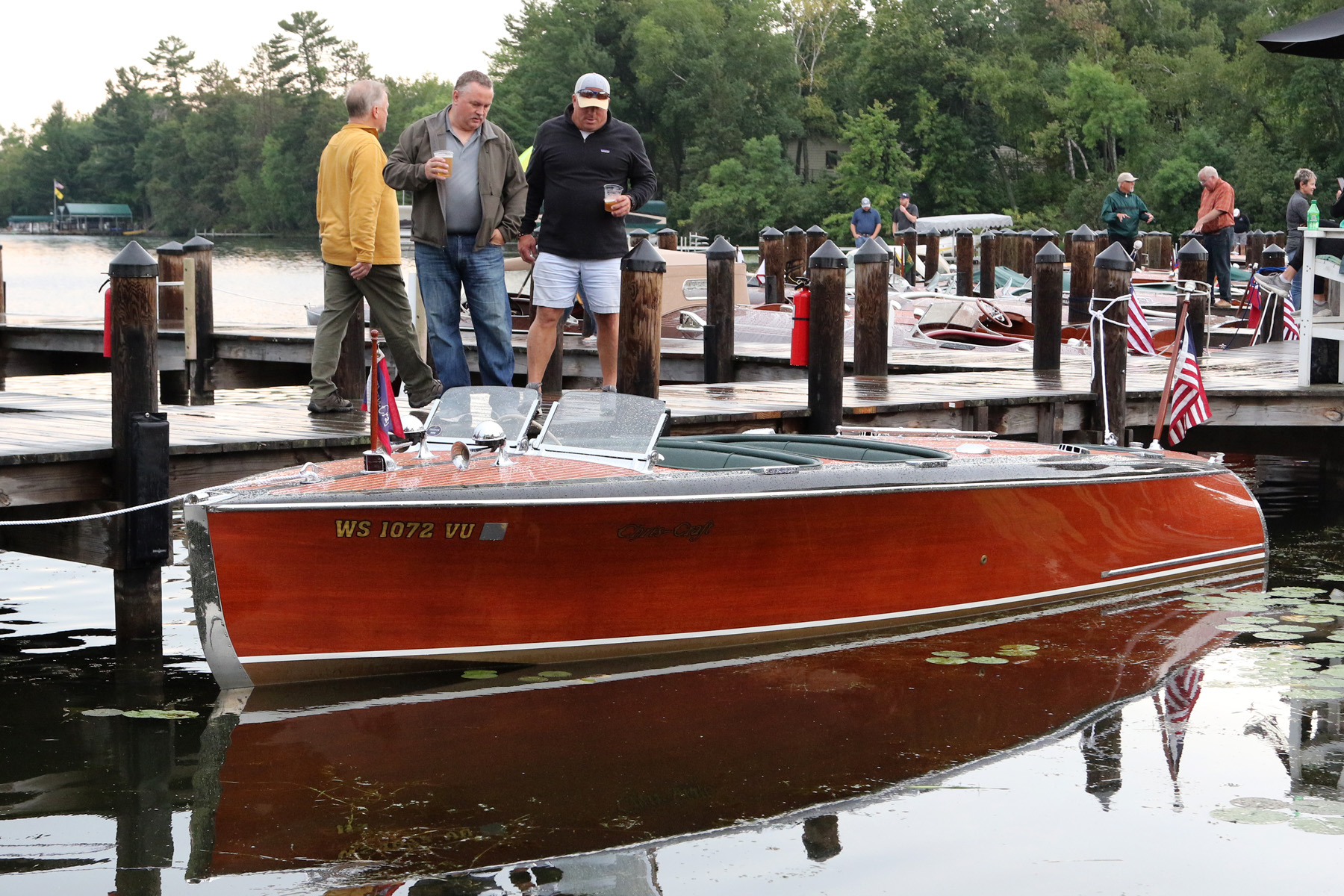 Another perfect 1940 23′ Chris-Craft Triple, this one is owned by Carl Mammel. “Bellissima” what a great name for a classic wooden boat. It looks at home in the water. And while we’re on the subject of Bellissima, here’s a shot Dane snapped of a 1965 Riva 22′ Ariston owned by Marc Langva. “Work Optional” I think these Woody Boaters should win the award for the Most Relaxed Classic Boaters on Gull Lake. Craig & Cindy Christianson (and company) on board their very cool 1968 Chris-Craft 20′ Grand Prix. And no boat show is complete without at least one classic Canadian built Shepherd runabout. “Nice Eh!” is 1956 18′ presented by the O’Conner-Johnson family. We were first introduced to Charlie Brown and his immaculate 1964 Chris-Craft 22′ Cavalier Dory named “Ste Geneveve” in 2015. She still looks great – as does Charlie. There’s something special about motoring across a peaceful lake, all alone, in a Chris-Craft Dory.

Dane Anderson would like to recognize the efforts of the entire Allen family and staff at the Bar Harbor Supper Club for making this show a resounding success. Also special thanks to Dave Bortner and the Land O’Lakes Classic Boat Club for helping to organize the event.

Join us tomorrow for Part 2 from Gull Lake as we dig a little deeper into a few of the classic boats and more photos from the show. – Texx